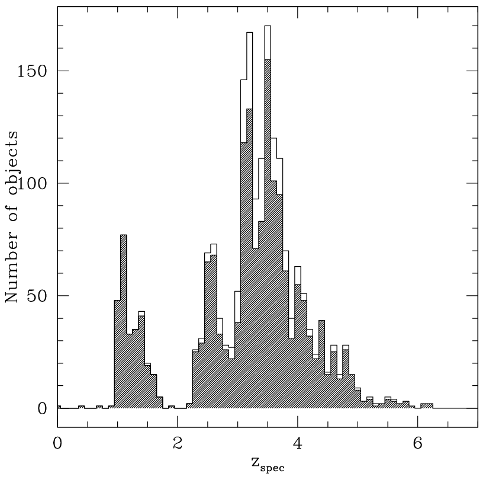 The fourth and final data release of the deep VIMOS survey of the CANDELS UDS and CDFS fields, VANDELS, is now available in the ESO Science Archive Facility.

Each target received between a minimum of 20 hours and a maximum of 80 hours of on-source integration time. The legacy of VANDELS consists of determining the key physical properties of high redshift galaxies such as their stellar population ages, metallicities and outflow velocities from detailed absorption-line studies.

This fourth data release consists of 2165 spectra (downloadable via the ESO Science Portal or programmatically), 1061 spectra in CDFS and 1104 in UDS field, respectively. DR4 totally replaces all products released in DR3 because of the new flux correction applied in the blue wavelength. In addition, DR4 provides 287 new spectra and 104 spectra of serendipitously observed objects.

In addition to the 1D spectrum products, this final release contains also the catalogue with spectroscopic redshifts and the derived physical properties for each galaxy. The catalogue can be queried via the Catalog Facility or TAP.

More information about the release content can be found in the accompanying documentation and in Garilli et al. (2021).