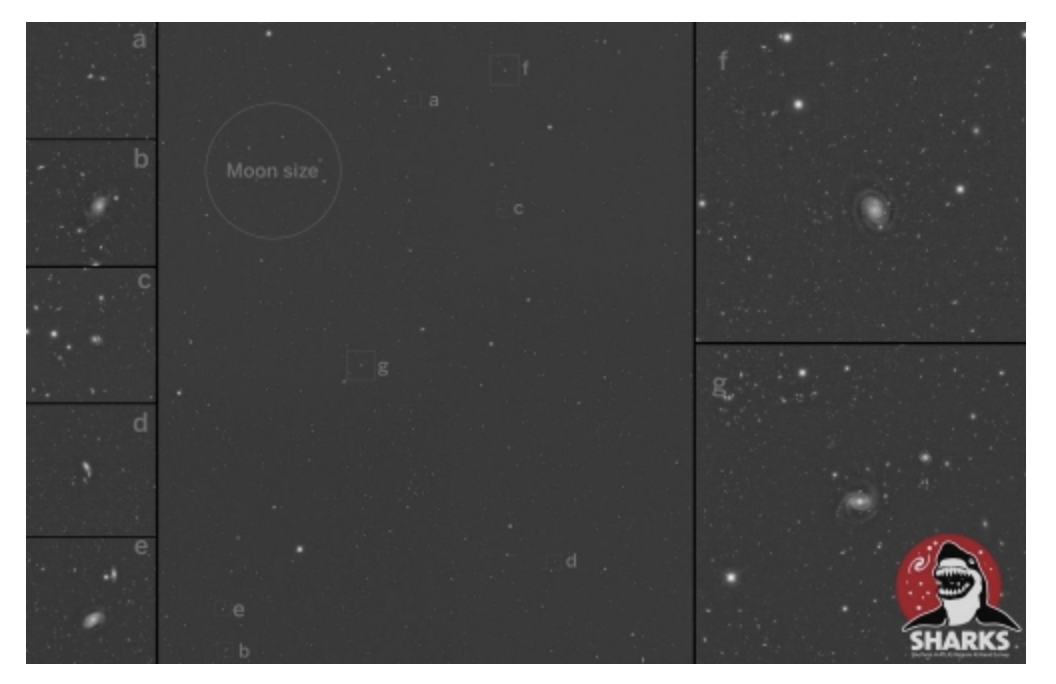 The Southern H-ATLAS Regions in Ks-band (SHARKS) is a deep Ks-band imaging survey conducted with the wide-field VIRCAM imager at the VISTA telescope. The project was granted 1200 hours of observing time under the ESO programme 198.A-2006, PI H. Dannerbauer, as one of seven approved second cycle VISTA Public Surveys.

It covers ~300 deg2, including large parts of the South Galactic Plane (SGP), GAMA-12h (G12) and GAMA-15h (G15) fields from the H-ATLAS survey, the largest Herschel program. The survey has been designed to provide the best possible counterpart identification for ∼90% of the sources detected at 0 < z < 3 by H-ATLAS, ASKAP, SKA and LOFAR; to produce a sample of strong lenses for cosmography studies; to study the evolution of the most massive structures in the Universe.

SHARKS DR1 consists of calibrated images and single band source catalogues from observations taken between March 2017 and January 2019. It covers a sky area of about 20 deg2, divided in 10 mosaics of ~2 deg2 each. The 10 mosaics are distributed as follows: four contiguous mosaics in the SGP-E region, and two unrelated mosaics each in the SGP-W, G15 and G12 fields. The mean depth reaches the expected Ks magnitude of ~22.7 (AB, 5sigma) with a mean seeing of ~1’’. The products are available via the ESO Science Portal or programmatically. More information about the release is available in the related documentation.

SHARKS DR1 has been produced in collaboration with the Instituto de Astrofísica de Canarias (IAC) and the Wide-Field Astronomy Unit (WFAU) at the Royal Observatory of Edinburgh.